1940
The British Secretary of State for War, Anthony Eden calls for volunteers to form the Local defense Volunteers force (LDV).

Admiralty order requires all owners of large boats to send in particulars within two weeks.

German forces break through the French front at Sedan.

British and French aircraft are unsuccessful in destroying the German-built bridges across the Meuse and 50 bombers are shot down by AA fire. 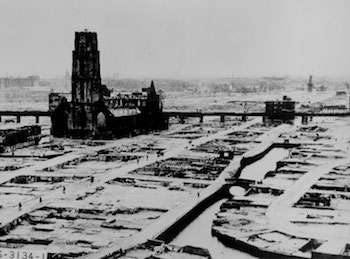 60 Luftwaffe He-111 bombers not having received the countermanding order attack besieged Rotterdam, devastating the center of the city.

Germans take Rotterdam as the Dutch government arrives in London.

British aircraft launch attacks against airfields in Syria which have been put at axis disposal by the Vichy French authorities.

1942
The U.S. Congress establishes The Women’s Auxiliary Army Corps (WAAC), under the direction of Oveta Culp Hobby, editor of the Houston Post.

The damaged British escort cruiser Trinidad returning from Murmansk is sunk by Luftwaffe dive-bombers off the northern Norwegian coast.

The British Army, in retreat from Burma, reach India.

SS day is celebrated in Oslo.

1944
French troops in Italy break through the Gustav Line.

1945
U-858 surrenders off Delaware, USA, becoming the first German warship to surrender to U.S. forces after the war ends.

Vienna radio announces the re-establishment of the Austrian Republic. The Anschluss with Germany is declared null and void. British troops occupy the German island of Heligoland in the North Sea.

USAAF B29’s firebomb Nagoya, the heaviest raid on the Japanese homeland so far, with 3,500 tons of bombs being dropped, which destroys the Mitsubishi works.