Seven out of eight Fairey Battle Bombers fail to return from an attack on enemy forces in Luxembourg. No. 114 Sqn’s Blenheims are annihilated on the ground in a low-level German raid. 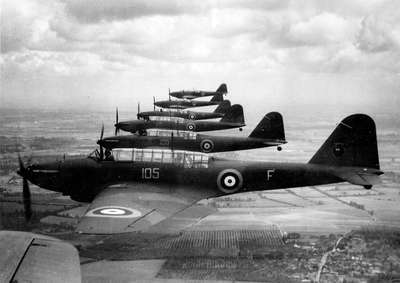 President Roosevelt expresses his dismay to King Leopold of Belgium about the German invasion.

1941
The RAF launches a heavy raid against Hamburg.

German troops complete the occupation of the Greek islands in the Aegean Sea.

Japan makes proposals to the USA in order to improve relations. They demand that the USA stop supplying war materials to China and that they normalize trade relations. These are rejected by the USA, although both sides agree to continue talks.

The Luftwaffe sinks three British destroyers, Lively, Kipling and Jackal to the South of Crete.

German troops continue their attack at Sevastopol, surrounding some defenders at Ak-Monay. The Luftwaffe is making about 1,800 sorties per day.

1943
The British evacuate Maumgdaw before the monsoon arrives in the Arakan. All ground gained since September 1942 for the loss of 5,000 battle casualties is lost.

1944
The British Eighth and U.S. Fifth Armies begin an attack on Gustav Line in central Italy with a 2,200-gun bombardment.

72,000 Chinese begin an advance along the Burma Road.

1945
The German garrison at Dunkirk surrenders to Czech troops.

The Red Army launches a final assault against the remnants of Army Group Centre, which is still holding out in Moravia.

In a new offensive, the U.S. Tenth Army reaches the suburbs of Naha, the capital of Okinawa. Wewak is captured by the 6th Australian Division.