1936
The German press warns that all Jews who vote in the upcoming elections will be arrested.

1941
The Italians launch another offensive against the Greek 1st Army in Albania, but it makes very little progress.

1942
The RAF returns to bomb Essen once more, but again are unable to inflict much damage due to the constant industrial haze over the city and the lack of landmarks, which made the city notoriously difficult to find.

The Government of the Dutch East Indies reaches Adelaide in Australia as all resistance on Java ceases and the island surrenders to the Japanese.

U-510 torpedoes eight ships in three hours off the coast of Brazil, in what is the most successful single U-boat action of the war.

Von Arnim replaces Field Marshal Rommel as C-in-C of the Axis forces in Tunisia and Rommel is ordered by Hitler to leave Africa, never to return.

1945
The U.S. First Army widens the Remagen bridgehead. The US Third Army captures Andernach on the Rhine. 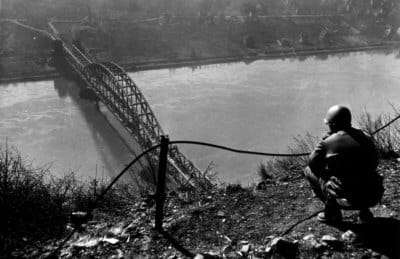 USAAF B29’s begin the firebombing of Tokyo, Nagoya, Osaka and Kobe. 16 and a half acres of Tokyo is burnt out in attacks which continue for 10 days.