1940
Heavy fighting is reported at the outskirts to Viipuri, as the Red Army continues its attempt to capture the city. This prompts the Finns to seek an immediate armistice, which the Russians refuse. Therefore the Finnish delegation in Moscow is instructed to sue for peace.

Martial law is proclaimed in Holland in order to extinguish any anti-Nazi protests.

1942
The RAF use GEE for the first time for target marking during a raid on Essen. The technique was known as ‘Shaker’ and consisted of aircraft marking the target with flares, allowing aircraft further behind to see the target more clearly. However the results of the raid were disappointing.

Rangoon falls to the Japanese as the British forces escape to the north. The 17th Indian Division was now holding the Irrawaddy area and the 1st Burma Division the upper Sittang valley. The Chinese Expeditionary Force were farther north, with the Fifth Chinese Army defending Mandalay and the 6th Chinese Army was at Toungoo and defending the Burmese province of Shan.

The Dutch on Java surrender to Japanese.

1943
Over 1,000 Germans wives of Jewish men deported to concentrations camps are now protesting in Berlin. To prevent this kind of protest from spreading, Joseph Goebbels orders the release of the 1,500 Jewish men. 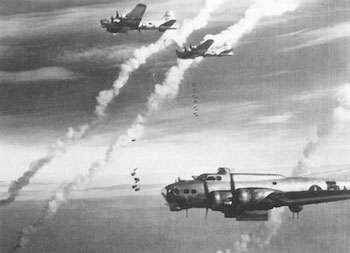 The US 8th Air Force carries out a heavy attack against Berlin. The primary target is the ball bearing plant at Erkner, a suburb of Berlin; enemy opposition is fierce and 37 bombers and 16 fighters are lost.

Beginning of secret negotiations at Bern, Switzerland, between representatives of the American OSS (Allan Dulles) and the German High Command in Italy (General von Vietinghoff and SS General Wolff) for an early surrender of German forces in Italy.

The Red Army penetrates into the ssouthern suburbs of Breslau.