1936
Hitler sends German troops into the Rhineland, breaking the Treaty of Versailles and the Locarno Pact.

1941
British and Commonwealth troops begin to arrive in Greece. 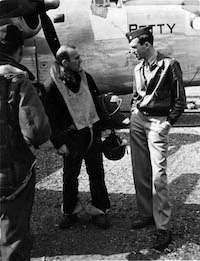 U-47, commanded by top ace Gunther Prien, hero of Scapa Flow, is sunk by the British Destroyer HMS Wolverine.

Actor James Stewart is inducted into US Army.

1942
Force H, consisting of HMS Argus and HMS Eagle and supported by a number of destroyers, sets sail for Malta with a number of Spitfires on board. Fifteen Spitfires were flown off when Force H came within range of the Island.

The Government of the Dutch East Indies flees Java for Australia.

1944
The Japanese begin the Imphal-Kohima offensive from northern Burma into Assam, India.

In reply to Arab protests, the U.S. says that the idea of a Jewish state has no official sanction.

1945
The U.S. 9th Armored Division makes a surprise dash across the undestroyed Rhine bridge at Remagen, establishing a crucial bridgehead on the East bank.