1940
Hitler changes his plans for the invasion of the west. At a military conference in Berlin, he decides to adopt the plan put forward by Gerd von Rundstedt and his former chief of staff, Erich von Manstein, for the Ardennes option. Code-named ‘Fall Sichelschnitt’, it called for the attack against the Low Countries to go ahead, but with slightly fewer forces, in order to draw the allies forward, while the decisive thrust would be mounted through the Ardennes. Holding attacks would be made against the Maginot line.

1941
German aircraft mine the Suez canal, blocking it for 3 weeks.

1942
Having received permission from Hitler, the Battleship Tirpitz and 3 destroyers set sail from Trondheim to intercept convoy PQ-12, but is spotted by a British submarine which relays the information onto the British Admiralty. However, bad weather means that the Tirpitz is unable to locate PQ-12 and so heads back to base. Enroute to Trondheim the Tirpitz is spotted and attacked by aircraft from HMS Victorious, but is not damaged. 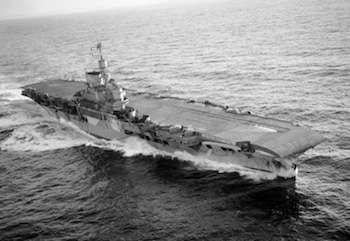 Japanese cut all roads north of Rangoon, trapping the British at Pegu.

1944
Bomber Command begins a large-scale offensive over northern France in preparation for D-Day.

The USAAF send 730 bombers and 796 fighters to Berlin, during which 69 bombers and 11 escorts are shot down.

Another ‘Chindit’ stronghold is established South of the Irrawaddy

The US 8th Air Force launches a heavy attack against Chemnitz in Saxony.