1940
The Russian launch a massive offensive and bring Viipuri under direct attack. This brings home to the Finns the fact that they cannot resist for must longer against the overwhelming force that the Russians are now deploying.

Italy protests to Britain over proposed ban on Italian imports of German coal.

1942
RAF Bomber Command, under its new C-in-C, Air Vice Marshal Harris, attacks the Renault plant in the Paris suburb of Billancourt. Of the 235 RAF planes that took off, only 1 failed to return. The new navigation device, GEE wasn’t used, although the target was marked with flares for the first time and serious damage done to production facilities with many French workers killed. This successful raid was a much needed morale boost for the bomber crews.

The Lancaster bomber makes its operational debut, laying mines of the French port of Brest. 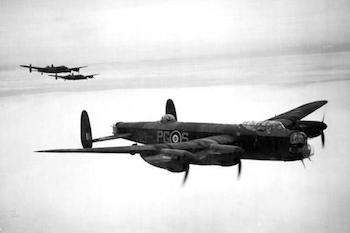 Vichy announces that ‘official’ German figures put the number of French arrested in 1941 at 5,390 and executions at more than 250.

1943
173 Londoners are killed in panic crush at Bethnal Green tube station when a new Anti-Aircraft weapon noise is heard for the first time.

Russians take Rzhev, over 100 miles to the west of Moscow.

For the war to date British civilian casualties total 50,324 dead, with military deaths at 50,103.

Under pressure from the Western Allies to withdraw all remaining Spanish troops from the Eastern front, the Franco government orders members of the so-called “Blue Legion,” attached to the German 121st Infantry Division, to return home and outlaws service by Spanish citizens with the Axis forces. Nevertheless, a handful of fanatically anti-Communist Spaniards defy orders and volunteer for service with the Waffen SS, some of them fighting suicidally to the end in the ruins of Berlin.

The allies announce that Russia is to get a third of Italian fleet, or equivalent in British and American warships.

1945
Units of the Canadian First Army capture Xanten on the lower Rhine in the battle of the Reichswald.

The US First Army captures Krefeld.

100 Luftwaffe night-fighters attack 27 RAF airfields, in what is the last night intrusion raid of the war. 22 RAF aircraft were destroyed for 6 German.

The fighting ends in Manila. Japanese resistance ends in Meiktila.

Finland declares war on the Axis.