1940
In German-occupied territories, only Jewish doctors are now allowed to treat Jews.

1941
A ‘Commissariat’ for Jewish Affairs is set up in Vichy France.

The Italians spot a British convoy escorted by 4 Cruisers and 4 Destroyers and close in. The British ships lure the Italians towards the main body of the Mediterranean Fleet which includes 3 battleships and the Aircraft Carrier HMS Formidable. HMS Formidable launches aircraft which attack and hit the Italian Battleship Vittorio Veneto with a torpedo, although it manages to limp back to Taranto. Later, they also hit the Cruiser Pola which is seriously damaged. The Italians decide to withdraw and detach 2 cruisers and 4 Destroyers to assist the damaged Cruiser Pola. However, the British intercept them and sink the Cruiser Pola and its 2 escort Cruisers Zara and Fiume as well as 2 of the escorting Destroyers. British losses total just 2 aircraft.

After 2 months and 14 separate meetings, the US and British staff conference ends with a basic framework for US-British co-operation should the USA be drawn in to the war. Most importantly an agreement was made that Germany should be defeated first.

Another sixteen Spitfires are delivered to Malta by Force H.

The Australian War Cabinet implements a ‘Total Denial’ policy in northern Australia should the Japanese invade. This would involve the conduct of a fighting withdrawal, with the evacuation or destruction of anything left behind. Already underway was a vast migration of sheep and cattle southwards, with those taking part are nicknamed ‘Overlanders’.

1943
British and Indian troops begin to withdraw from Arakan in western Burma, under heavy Japanese pressure.

Meat rationing begins in the USA and is set at 28oz per week.

1944
The U.S. Navy bombards the Palau Islands to the East of the Philippines, destroying 150 planes, six naval vessels and 100,000 tons of shipping. 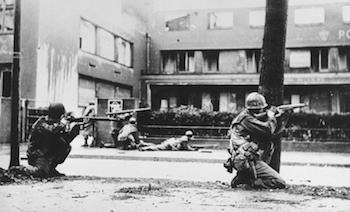 Troops of the 1st Belorussian Front finally capture the fortress town of Kastrin against desperate German resistance. The Russians seize the oilfields South of Komorn in Hungary, the last source of petroleum for the German war effort.