1940
US allows sale of military aircraft to the Allies.

1942
US troops occupy the Society Islands.

Standard Oil president William Stamps Farish II pleads no contest for conspiring with Nazis and hiding patents for synthetic rubber from US government.

US Naval Task Force 39 leaves Maine for Britain to protect convoys to Russia, relieving the Royal Navy to protect the Mediterranean and to invade Madagascar. 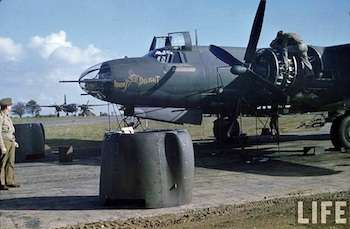 1944
Manstein persuades Hitler to allow the First Panzer Army to break out to the west of Lvov, not south.

1945
The U.S. First Army breaks out of the Remagen bridgehead. The British Second Army captures Wesel which has been nearly 100% destroyed by Allied bombing.

The U.S. Navy begins the pre-invasion bombardment of Okinawa firing more than half a million shells and rockets in a week.

US Fifteenth Air Force based in Italy flies its last strategic mission of war: 650 bombers hit Prague and Cheb, Czechoslovakia.