1941
Berlin suffers its first raid of the year by the RAF.

German troops on parade in the city of Cherbourg have their show spoiled when British bombers hit the parade ground in the middle of the event.

Rommel conducts a limited offensive to recapture El Agheila from the British, which succeeds with startling ease. This encourages Rommel to push forward towards Mersa Brega. British Somaliland is now clear of Italians.

1942
The British Government refuses to hold an inquiry into the loss of Singapore during a Lords debate.

The start of deportation of Slovak Jews to Auschwitz. 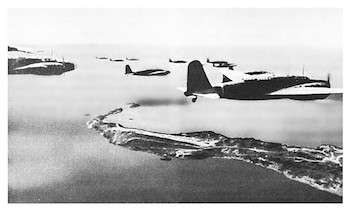 1944
The US Fifth Army’s bridgehead at Anzio is bombarded by German heavy long-range guns and Luftwaffe aircraft using guided bombs, causing severe casualties in men, ships and equipment. Persistent US and British attacks against the Gustav Line at Cassino are repulsed by the German defenders. In response to the killing of 35 German soldiers in Rome by the Italian resistance, SS Colonel Herbert Kappler orders the execution of 335 Italians, at least 255 of whom are civilians in reprisal. All are shot by German troops in the Fosse Ardeantine caves outside of Rome.

A Russian tank army crosses the Dnieper near Czech border. Malinovsky makes crossings of the Bug near the Black Sea.

The Luftwaffe attacks London with 90 medium bombers (He-111s and Ju-88s), while the RAF bombs Berlin with 810 heavy Lancaster bombers. The RAF loses 72 bombers in this, the 16th and heaviest raid of war on Berlin. The ‘Battle of Berlin’ is now over.

Wingate, leader of the Chindits is killed in plane crash.

The Japanese counter-attack on Bougainville is decisively beaten.

In response to the killing of 35 German soldiers in Rome by the Italian resistance, SS Colonel Herbert Kappler orders the execution of 335 Italians, at least 255 of whom are civilians in reprisal. All are shot by German troops in the Fosse Ardeantine caves outside of Rome.

1945
Montgomery’s 21st Army Group attacks across the Rhine, 15 miles North of Duisberg in the Wesel area, after 3,500-gun barrage. 16,870 paratroops land across the river Rhine in Operation ‘Plunder’ and succeed in linking up with advancing British troops and establishing four bridgeheads. The US Third Army captures Speyer and Ludwigshafen on the upper Rhine.

US Fifteenth Air Force based in Italy sends 660 bombers to Berlin for first time as a diversion for Rhine crossings. The escorting 332nd Fighter Group (the African-American Tuskegee Airmen), shoots down 3 German Me 262 jets and earns Distinguished Unit Citation.

U.S. Marines seize islands off coast of Okinawa in Pacific.