French Prime Minister Edouard Daladier resigns after vote of no confidence from Parliament.

The Berbera force and elements of the 11th African Division meet at Hargeisa inside British Somaliland.

1942
Kesselring launches an intensified air offensive against Malta, which by the end of March had racked up 4,927 sorties for the Luftwaffe, as opposed to 2.497 during February.

The Red Army offensive at Kerch in the Crimea is defeated with heavy losses to the Russians.

About 1,000 schoolteachers are arrested in Norway.

In what was to become known as the 2nd Battle of Sirte, 4 freighters, escorted by 3 cruisers, 1 anti-aircraft cruiser and 17 destroyers leave Alexandria
bound for Malta. This force would later be strengthened by the cruiser Penelope and a destroyer from Force K.

Japanese troops, reinforced by the 18th and 56th Division which had arrived by sea at Rangoon a few days earlier, attack the 6th Chinese Army near Toungoo in Burma.

1943
The Eighth Army continues its attacks against the Mareth line in southern Tunisia. 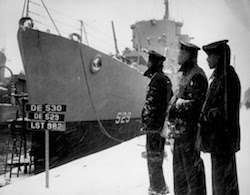 The Russians recapture Vinnitsa in the Ukraine, the site of Hitler’s Headquarters during in 1943.

1945
German troops of Army Group Weichsel evacuate their bridgehead across the Oder at Stettin. The Russians capture Braunsberg, 40 miles South of Konigsberg.

Onn Luzon, a force of Filipinos takes San Fernando, led by US Col. Russell Volckmann, who refused to surrender to the Japanese in 1942

The British 19th Indian Division completes the capture of Mandalay.