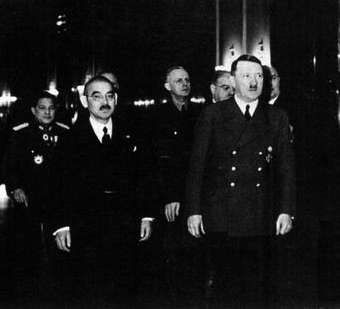 The US House of Representatives passes the ‘Lend Lease’ Bill by 317 votes to 71, where upon it is immediately signed by President Roosevelt. Initial priority for war supplies was to be given to Britain and Greece.

British diplomats from Bulgaria reach Istanbul, although 2 people are killed when a bomb in their luggage explodes.

1942
General MacArthur leaves Corregidor and the Philippines for Australia, after being ordered to assume command of the new South-West Pacific area, which in effect meant all Allied forces in the Pacific. MacArthur’s last words before leaving were “I shall return!” General M. Wainwright takes over command in the Philippines.

1944
Zhukov is stopped on River Bug after a 60-mile advance.

Some 12,000 Chindits are now behind Japanese lines in Burma. British forces capture Buthiduang on the Arakan front.

1945
The US third Army captures Kochem on the lower Moselle river.

The Red Army advances towards Gotenhafen, a vital port of embarkation for tens of thousands of refugees from East Prussia.

An RAF Bomber Command record for the largest tonnage dropped on a single target in single day is achieved at Essen when 4,661 tons are dropped.