The Los Baños Raid is eclipsed in size and fame by the airborne drops of the Normandy and Market Garden Airborne Operations, however its technical and operational excellence remains the standard to this day.

On January 9, 1945, with the majority of the Philippines already under Allied control, American forces made landfall on Luzon, the largest and most populated island in the Philippines. By late February, the month-long battle for the capital city of Manila was winding down, when General MacArthur’s attention was drawn to a new crisis. 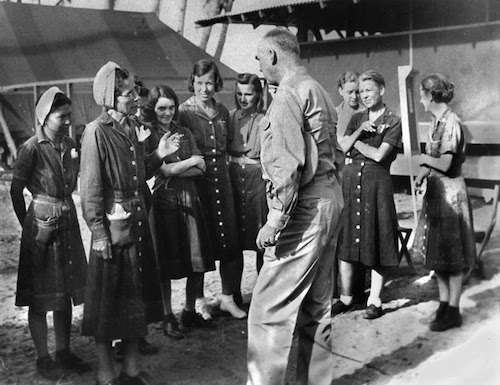 The Japanese operated several internment camps on the island, some for POWs, others for civilian prisoners. Throughout the advance through Luzon, MacArthur was keenly aware of the possibility that the Japanese might massacre these inmates rather than allow them to be rescued and had done everything to liberate these camps in time. The last major camp, however, was still held by the enemy. Built on a 60-acre site belonging to the University of the Philippines, Los Baños Internment Camp housed around 2,147 people, almost all of them civilian foreigners: missionaries, nuns, priests, children, doctors and engineers. The most notable of the few military personnel were the dozen US Navy nurses known as “the Angels of Bataan and Corregidor,” who were captured during the Japanese invasion in 1941 but continued serving as a nursing unit during the imprisonment. The camp was located to the southeast of Manila, behind enemy lines and in close proximity of a strong Japanese force, near the shore of the large inland lake of Laguna de Bay. The prisoners were exposed to much hardship, deliberately underfed and only given a single chance a day to draw drinking water from a rickety tap. 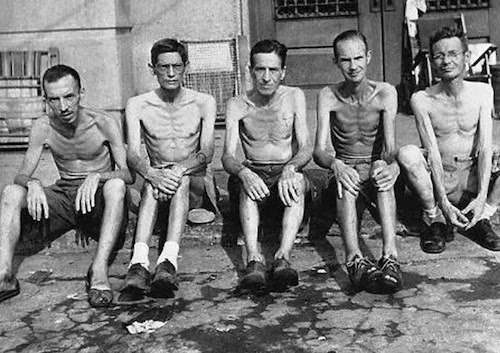 With no way to break through quickly enough to protect the inmates, it was decided that the rescue should utilize an airborne unit working together with amphibious forces on the lake and the local Filipino guerillas.  Thus was born the Los Baños Raid. The only airborne force in the Pacific was the 11th Airborne Division. Luckily, the 11th was already participating in the liberation of the Philippines, but most of their units were bogged down fighting in various locations. MacArthur originally wanted the rescue to take place on February 3 but it took so long to withdraw the necessary troops that it had to postponed until February 23. 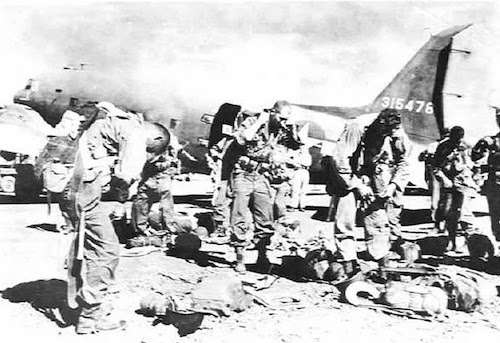 There were many local guerilla groups fighting the Japanese occupation and the General Guerilla Command (GGC) was set up by US forces to coordinate actions. The rescue leaned heavily on these groups, most notably the Hunters ROTC, consisting of former cadets of the Philippine Military Academy; the President Quezon’s Own Guerillas; and the Hukbalahaps, a Marxist group of peasant farmers often considered to be more like terrorists than freedom fighters. Over the nights before the operation, camp escapees made contact with the guerillas and provided them detailed information on camp routine, which was relayed to the Americans. 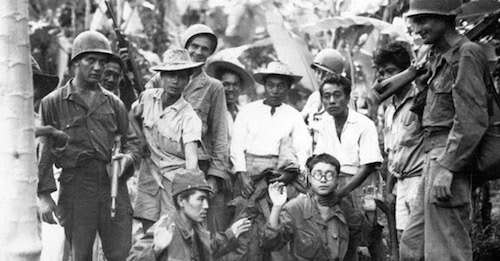 The plan for the Los Baños Raid called for four “phases.” In Phase 1, the 11th Airborne Provisional Reconnaissance Platoon, led by 1st Lt. George Skau, would cross the lake two nights before the attack in three banca fishing boats. They would then make contact with the guerillas, lie low and wait until 7AM on the 23rd and assault the camp gates from several directions. In Phase 2, Lt. John Ringler would jump with a company and a machine gun platoon from the unusually low altitude of 400-500ft, land right outside the camp and neutralize remaining guards with the aid of Hukbalahap. Meanwhile, Lt. Col. Joseph Gibb would lead 54 “Amtrak” landing vehicles across the lake, make the last two miles to the camp on the ground and evacuate the inmates as Phase 3. Phase 4 was a diversion: Col. Robert Soule would lead a glider infantry regiment, a tank destroyer company and supporting artillery elements down a nearby highway to distract and tie down the nearby Japanese division, preventing them from squashing the rescue operation. Atypically for the time, the commanders who would be leading their units on the ground were given the task of drawing up the specific plans themselves, rather than receiving them from above. 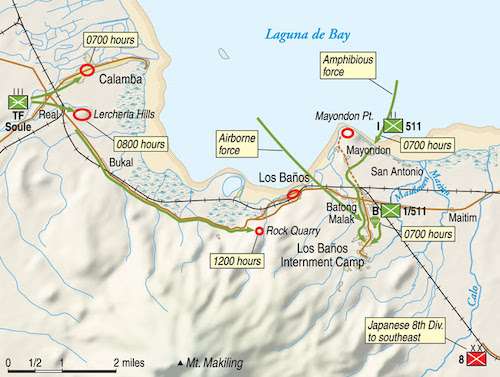 Phase 1 hit a glitch on departure, when they learned that the third banca, carrying the heavy weapons, ammo, rations and weapons for the guerillas, had a broken rudder and later faced poor winds, arriving almost a day after the rest of the team. In the early hours of the morning of the attack, the paratroopers boarding their C-47s noticed that one of them bore the word RESCUE in big yellow letters on the side. There is no official paperwork remaining on this but perhaps the air crew wanted the internees to know what was happening and give them a few extra minutes to prepare.

Other than the slight delay for the recon and guerilla force, the attack was sprung without a hitch and caught the Japanese camp guards as a total surprise. Based on the daily routine leaked out by the inmates, the American and Filipino soldiers showed up when most of the Japanese personnel were gathering for their daily callisthenic exercises, unarmed and wearing only a loincloth. Within 20 minutes of the first shots, the camp garrison was almost completely subdued. 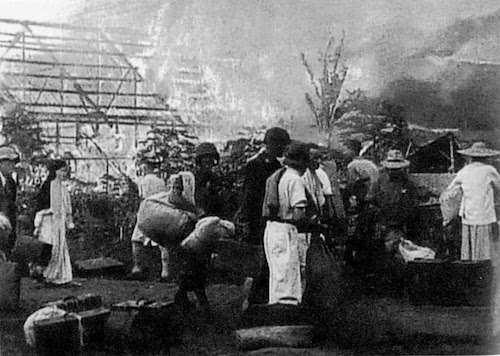 Over 2,000 prisoners were now milling around in confusion, many of them heading back to their hatched huts to fetch their personal belongings. However, there was no time for such delays. The paratroopers had noticed that the crowd tended to move away from the few huts that caught fire during the fighting; so they started lighting up the rest on purpose, using the quickly spreading flames to herd the uncooperative crowd towards the camp entrance, where the Amtraks were waiting for them. 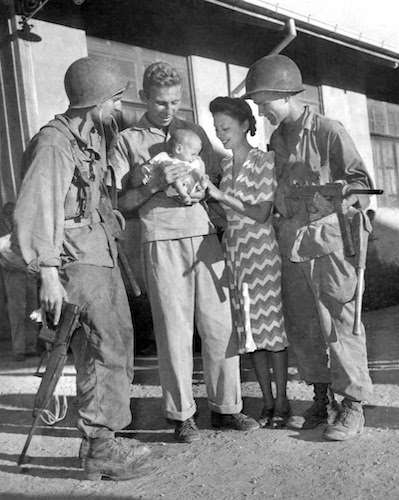 Half of the liberated men were herded on the vehicles while the other half started the walk down to the beach to be picked up there, since the vehicles needed to make two rounds to ferry everyone to safety. While they were in the water, the Amtraks came under sporadic mortar fire from the shore, but suffered no hits. The crew of a 75mm pack howitzer carried on one of the landing vehicles noticed a Japanese machine gun position and decided to take a potshot at it. The position fell silent but recoil caused the Amtrak to dip from side to side, taking on water every time. Its driver drew his Colt and pointed it at the howitzer crew: “Anyone loading that thing again gets a bullet in the head.” 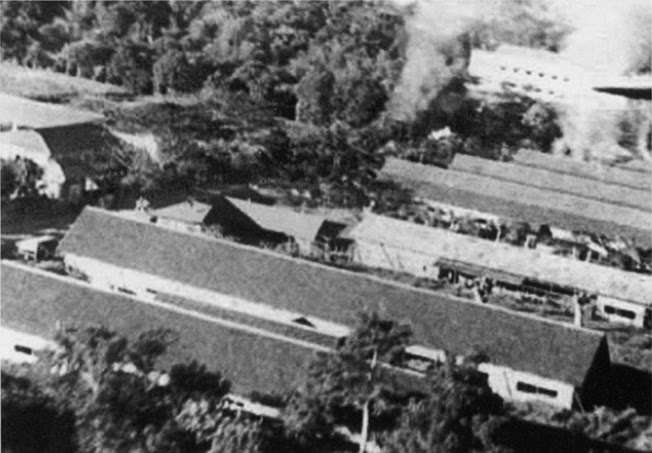 By around 3PM the beachhead was clear of soldiers and internees; the raid was a success. Thanks to the detailed plan and the complete surprise attack, over 2,000 men were rescued with the loss of only two American soldiers and two Filipino guerillas. Unfortunately, there is a dark epilogue to the story. A few days after the operation, Japanese troops, led by the camp’s sadistic second-in-command Warrant Officer Sadaaki Konishi and accompanied by pro-Japanese Filipino militants, returned to the site. Finding the prisoners gone, they turned their rage on the inhabitants of the nearby village, who had ignored warnings to evacuate the area. Around 1,500 men, women and children were slaughtered, many families tied to the supporting stilts of their houses which were then set on fire, collapsing. After the war, Konishi was arrested and executed for his actions.