1940
Churchill tells Commons ‘We shall fight on the beaches, in the fields, in the streets and in the hills. We shall never surrender.’

Holiday camps are banned within 10 miles of east and south-east coasts of England and Isle of Wight.

1941
Luftwaffe bombers carry out a night raid on the port of Alexandria in Egypt, killing 100 people. The Egyptian Cabinet resigns. 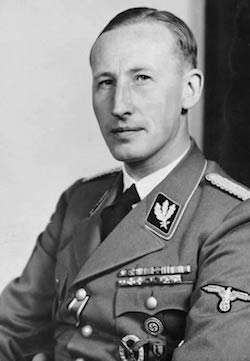 Reinhard Heydrich dies of his wounds.

Hitler flies to Finland to meet with the Finnish head of state, Marshal Mannerheim.

The American garrison received prior warning of this from a spotter aircraft. This raid fails to sufficiently neutralise US airpower on Midway and so Nagumo orders a second attack against Midway.

His aircraft are in the middle of being rearmed with torpedoes for a strike against the US carriers, should they be spotted. The Admirals orders mean that the Japanese aircraft must first replace their torpedoes with bombs, before another strike against Midway can take place. At 8.20am Japanese reconnaissance aircraft reported sighting the American carriers and at 8.55am warned that US torpedo aircraft had been launched and were on their way towards the Japanese fleet. While this is going on, the Japanese aircraft which had been sent out on the second strike against Midway, begin to return and by 9am had all been landed. Crews were now swarming round the aircraft with fuel hoses and bomb racks in a desperate attempt to get them ready for a strike against the American Carriers. At 9.30am the torpedo bombers from the Hornet and Enterprise found the the Japanese carriers, but by 9.36am they had all been shot down. The Hornet’s and Enterprise’s dive-bombers failed to find the Japanese carriers and so turned for home, although many ran out of fuel on the way. A similar fate was suffered by all the fighters on this mission. The torpedo bombers of the Yorktown now found and attacked the Japanese carriers, but with the same result as the previous attacks and by 10am it all seemed to be over and Admiral Nagumo could prepare for his counter strike in what seemed total safety. However, because his fighters had been drawn down to sea level to deal with the Yorktown’s torpedo-bombers, the sky above the Japanese carriers was left temporarily exposed to attack. At 10.25am a lost dive-bomber group from the Enterprise stumbled upon the undefended Japanese carriers. The 37 Dauntless dive-bombers plunged down in to the attack. With their decks cluttered with aircraft in the throws of being re-armed and refuelled, the Japanese carriers were in serious danger. Admiral Nagumo’s flagship, the Akagi was the first to be hit and a bomb started a fire in the torpedo store. This fire was so fierce that the Admiral had to abandon the Akagi and shift his flag to a destroyer. The carrier Kaga was hit next by four bombs, which set ablaze the ships aviation fuel and forced her also to be abandoned. The Soryu was hit as well, this time by 3 bombs. These started a fire on deck amongst the parked aircraft and also caused her engines to stop. In just five 5 minutes 3 Japanese carriers had been put out of action, but the agony was not yet over. At noon an American submarine found the stricken Soryu and sank her by torpedo. The Hiryu, which so far was undamaged, was ordered to withdraw at speed from the area in order to save herself. During her withdrawal the Hiryu managed to launch two strikes against the Yorktown at noon and 2.40pm, which caused severe damage to the Yorktown. At 3.30pm Admiral Yamamoto gave the order for the Akagi to be scuttled by torpedo as it had not been possible to save her. By 5pm the Kaga had also succumbed to her wounds and sank. At the same time the Hiryu’s luck ran out when she was spotted and attacked by dive-bombers from the Enterprise. Hit by four bombs, the Hiryu was set on fire from stem to stern and had to be scuttled by her crew. Farther north, aircraft from the Japanese 2nd Carrier Strike Force bomb Dutch harbor in the Aleutians as planned, damaging the islands fuel tanks and a US ship. US efforts to locate this force are unsuccessful.

1943
The House of Commons rejects any lifting of the economic blockade against occupied Europe.

A Military coup takes place in Argentina, with the army occupying Buenos Aires.

1944
Eisenhower postpones ‘Operation Overlord’, the allied invasion of France, for 24 hours because of rough seas in the English Channel.

The RAF carries out heavy night raids against German coastal batteries and fortifications in Normandy.

U-505, patrolling off Cape Blanco on the West African coast is forced to the surface by depth-charges from the U.S. destroyer escort Chatelain and is captured intact and towed to Bermuda by the escort carrier Guadalcanal. (More Info)

The first B29 (Superfortress) combat mission is made against the Bangkok railway.

1945
U.S. troops land on the Oriko peninsula of Okinawa.