*1934
Adolf Hitler began his ”blood purge” of political and military leaders in Germany. Among those killed was one-time Hitler ally Ernst Roehm, leader of the Nazi stormtroopers. 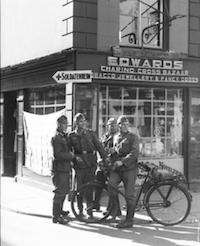 Germans troops land on Guernsey in the Channel Islands.

The last French defenders of the Maginot Line surrender.

Governor General of Hong Kong orders evacuation of women and children to the Philippines as Japanese blockade colony.

1941
Vichy France breaks off diplomatic relations with the Soviet Union.

1942
The costliest fiscal year in U.S. history comes to a close. More that $32 billion has been spent, $26 billion on war expenditures alone. The total exceeds the amount on WWI in its entirety.

Returning from a successful patrol in the Gulf of Mexico (12 ships sunk), U-158 (Kptlt. Rostin) is destroyed by a US Mariner flying boat off Bermuda.

As the Panzer’s roll eastward in Russia, they haul in hordes of Russian POW’s. With five German armies (two panzer), two Romanian, one Italian (including a number of mountain divisions) and one Hungarian Army in the van, all tolled 89 divisions on the offensive. While the Panzer’s are fully motorized, the bulk of the remaining forces depend on horses for transport and supply. As the advance lengthens, so do the supply lines, and shortages soon begin to appear at the sharp end. The Russian garrison at Sevastopol begins to evacuate itself by night. Field Marshal Wilhelm Keitel, chief of the Oberkommando der Wehrmacht, telegraphs his troops, “In line with the prestige and dignity of the German Army, every German soldier must maintain distance and such an attitude with regard to Russian POW’s as takes account of the bitterness and inhuman brutality of the Russians in battle.” Prestige and dignity will be maintained, Keitel continues, as follows “Fleeing prisoners of war are to be shot without preliminary warning to stop. All resistance of POW’s, even passive, must be entirely eliminated immediately by the use of arms.” Russian POW’s are placed into camps where the dead lie undisturbed for weeks on end. German guards periodically enter the camps to get rid of bodies with flame-throwers.

At Auschwitz, a second gas chamber, Bunker II (the white farmhouse), is made operational at Birkenau due to the number of Jews arriving.

Rommel spearheads reaches El Alamein. The port facilities at Alexandria are prepared for demolition, should the axis forces not be stopped at El Alamein. In what became known as ‘Ash Wednesday’, British HQ is Cairo begins to destroy classified papers and prepares for evacuation to Palestine. A brave but disorganized Eighth Army is addressed by General Auchinleck, who tells them, that ‘He (Rommel) hopes to take Egypt by bluff. Lets show him where to get off.’ This comes as ‘Ultra’ interceptions told them that Rommel would attack their positions at El Alamein the following day.

1943
The British publish aircraft losses incurred to date, with Axis losses of 18,031 aircraft and RAF losses of 9,906 aircraft.

Operation ‘Cartwheel’ continues with the occupation of Rendova, north west of Guadalcanal. The Trobriand and Woodlark islands between Solomon’s and New Guinea are also occupied.

1944
The United States breaks off diplomatic relations with Finland.

The remaining 6,000 Germans in the Cherbourg peninsula surrender. The Germans forces retake Hill 112 from the British 2nd Army.

1945
The Chinese take Liuchow and capture towns on the Indo-Chinese border.