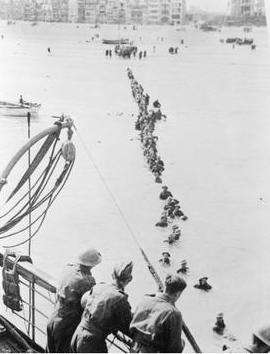 All aliens and stateless persons living in Britain are forbidden to leave home between 10:30 pm and 6 am.

Churchill orders the setting up of commando forces to be used for raiding occupied Europe.

The last night of the Dunkirk evacuation sees 26,700 French soldiers lifted from the beaches. This brings the total rescued to 224,686 British, 121,445 French and Belgian troops. Most of the French opt to return to France toÂ continue the fight. During the evacuation, 177 aircraft were lost (Germans lost 140 aircraft).

Admiralty announce the loss of six destroyers, 24 small warships and participation of 222 British naval vesselsÂ and 665 other craft in Dunkirk operation. 226 vessels are sunk altogether.

British and French forces start to evacuate from Narvik in northern Norway.

1942
Task Force 16 (Spruance) and 17 (Fletcher) meet 350 miles north-east of Midway. Admiral Fletcher takes overallÂ command of the joint task force, although the two would act separately. US land based aircraft from Midway spotÂ the Japanese Transport Force about 600 miles from Midway. They launch attacks against this force, but withoutÂ success. US reconnaissance aircraft spot the 2 carriers of the Japanese 2nd Carrier Striking Force, which wereÂ about 400 miles from Kiska in the Aleutians.

1944
Hitler allows Kesselring to withdraw from Rome, which has now been declared an ‘Open City’.

The Japanese rearguard at Kohima retreats, ending a 64 day battle.