1940
All French ships in British ports are seized by the Royal Navy.

Romania agrees to cede Bessarabia to the USSR. 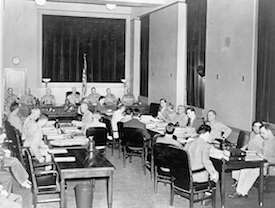 The FBI announced the capture of eight Nazi saboteurs who had been put ashore from a submarine on New York’s Long Island.

Convoy PQ-17 sets sail from Iceland. It consists of 35 merchants, 3 rescue ships and 2 tankers for refueling and is heavily loaded with 297 aircraft, 594 tanks, 4246 lorries and gun carriers, plus an additional 156,000 tons of cargo. The convoy is to be guarded by 21 close escorts, 7 warships from a cruiser covering force and a further 19 warships in a distant covering force. All told 1 aircraft-carrier, 2 battleships, 6 heavy cruisers, 23 destroyers, 4 corvettes, 3 minesweepers, 2 AA ships, 4 ASW trawlers are to protect the convoy. Additionally, 15 submarines, six of them Russian are placed ahead of the the convoy.

German troops begin to outflank the British positions at Mersa Matruh. As this happens the British start to withdraw towards the El Alamein line, confirming radio intercepts that had indicated they would.

The Red Army recaptures Orsha on the Dnieper and destroys the trapped German 53rd Korps near Vitebsk. Further gains are reported by the Russians at Mogilev to the South of Vitebsk.

The American Army captures the port city of Cherbourg, France.

In a sure sign the war is winding down, the Ford company lays off workers at its Willow Run airplane factory near Detroit. The employee force is reduced to 4,000, from a peak of 42,000 workers making B-24 bombers.