1940
Franco-German armistice negotiations begin at Compiegne, during which Hitler informs the French representatives of his terms in the same railway carriage as the German surrender was signed in 1918.

Hitler issues a proclamation announcing the end of the war in the West and orders flags to be flown throughout Germany for ten days.

The Polish government-in-exile arrives in London.

1941
Hitler orders German subs not to attack US warships.

Prime Minister Churchill comments on the possibility of an alliance with the Soviet Union: “If Hitler invaded Hell, I would make at least a favorable reference to the Devil in the House of Commons.” 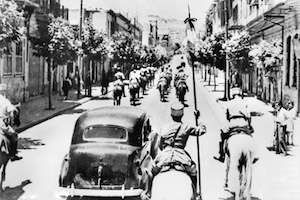 US State Department orders closure of all Italian consulates in US by July 15.

1942
The Luftwaffe carries out a night raid against Southampton.

German infantry and combat engineers of 11th Army are gaining ground slowly in their assault on Sevastopol, but the ferocious Russian defense at Sevastopol forces Adolf Hitler do something he doesn’t like to do, namely delay the German Summer offensive.

1943
The RAF launches a heavy raid on Krefeld in the Ruhr, but lose 44 aircraft.

1944
The US 8th Air Force carries out raids on Berlin and the synthetic fuel plants at Leuna-Merseburg, which then continue on to Russia.

A further Russians assault against the Finns opens in eastern Karelia. The Red Army begins an offensive between lakes Ladoga and Onega on the northern front.