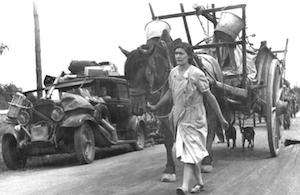 If invaders come leaflet is issued by Ministry of Information to all households. The British Jockey Club announces no more racing until further notice.

The Germans invite the French to send a representative to discuss armistice terms as their troops reach River Loire, advance on Lyons, capture Strasbourg, Brest and Tours. Rommel takes Cherbourg.

The Russians order a black-out of all major cities and towns near the border. However, they still do not allow their troops to take up battle positions, in spite of information given by two German deserters of an imminent attack.

Churchill and Roosevelt meet to discuss the number of conflicting offensive plans which might be launched against Germany in 1942. The main ones were ‘Rutter’, a 24-hour cross Channel raid on Dieppe. ‘Sledgehammer’ using six division to establish a lodgment on the French coast at Cherbourg and ‘Jupiter’ which called for a lodgement in northern Norway. Discussion were also had on the up and coming operation ‘Gymnast’, which was the proposed Anglo-American landing in French North Africa later in the year.

Plans for the offensive in to the Caucasus are captured by the Russians when a staff officer from the 23rd Panzer Division is shot down. Against all order, he was carrying the plans on his person. 40th Panzer Corps commander, General Stumme and his chief of staff are immediately sacked and imprisoned on Hitlers express orders. No changes were made to the plan as although the Russians considered them authentic, they believed that it was only a subsidiary thrust and that the main objective was still Moscow, which suited the Germans.

Rommel launches a surprise attack from the southeast against Tobruk. This throw’s the garrison into confusion which allows German troops to breach the outer defenses.

United States pharmacies are urged to turn in quinine supplies over 10 oz..

1943
RAF carries out a raid on the Schneider armaments works at Le Creusot.

Goebbels declares Berlin to be Judenfrei (cleansed of Jews).

U.S. Navy carrier-based planes shatter the remaining Japanese carrier forces in the “Battle of the Marianas”. Also known as the “Great Marianas Turkey Shoot,” Americans shoot down 402 Japanese planes while only losing 20.

1945
The Australians are now in control of both sides of the Brunei Bay entrance.