The garrisons of Belfort, Metz and Dijon surrender.

Hitler and Mussolini meet in Munich to discuss French request for peace.

General de Gaulle forms the French National Committee in London and vows to continue the war on the side of Britain, saying that «France has lost a battle, but France has not lost the war.

Churchill speaks to Commons: let us so bear ourselves that . . . men will still say, “This was their finest hour”. 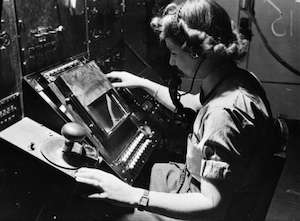 British press give details of development of Radio Location­ (radar) and its use in Battle of Britain.

1943
Field Marshal Wavell is to become the Viceroy of India, with General Auchinleck becoming the C in C of India. A new East Asia Command is to be established.

1944
The US First Army cuts off and isolates the German forces defending Cherbourg.

The British 2nd Division manages to advance 14 miles towards Imphal.

1945
Eisenhower arrives in Washington to a heroes welcome.

Japanese resistance ends on Mindanao in the Philippines.

The USAAF begins the fire blitzing of 58 smaller Japanese cities.

Truman approves OPERATION DOWNFALL with the JCS predicting 200,000 US casualties.