1940
Liner Lancastria, with 3,000 British troops aboard, bombed and sunk at St. Nazaire, in North West France.

Churchill broadcasts to the nation, saying the British will defend their island home and fight on until the curse of Hitler is removed. Unemployment in Britain falls 114,000 in May to new low of 767,000.

The USSR announces that Estonia and Latvia have agreed to the free passage of troops and to the formation of new governments. 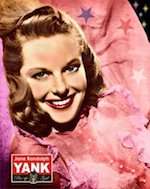 The Eighth Army’s withdrawal reaches the Egyptian frontier, leaving behind a garrison of some 30,000 troops at Tobruk, which is now again under siege.

Four German saboteurs are landed by U-584 at Ponte Vedra Beach near Jacksonville, Florida.

1943
The British battleships Valiant and Warspite are transferred from Scapa Flow to Oran and Alexandria in North Africa in preparation for Operation Husky, the Allied invasion of Sicily.

German troops evacuate the island of Elba off the west coast of Italy.

In Normandy, US First Army cuts off Cotentin Peninsula, trapping Germans in Cherbourg.