1940
French front cracking as the Germans break through in Champagne to Dijon, with units of 19th Panzer Korps reaching Besancon on the Swiss border. German forces, supported by heavy artillery and Stuka dive bombers, continue their assault against the Maginot Line on a broad front.

The French government of Paul Reynaud resigns and is replaced by one led by Marshal Petain who immediately appoints Weygand as Minister of National Defence. 57,000 British troops are evacuated from Nantes and St. Nazaire.

The Red Army occupies Latvia and Estonia. Tens of thousands of “hostile’ natives and their families are rounded up and deported to NKVD prison camps around the Soviet Union.

U-101 sinks the British merchant ship Wellington Star in the Bay of Biscay.

1941
The US State Department orders the closing by the 10th July of all German consular offices and tourist agencies in the United States. Italians closed down on 19th June.

1942
After intense air attacks and Italian fleet sorties, the Gibraltar convoy reaches Malta, but the Alexandria convoy is forced back. During these attempts to reach Malta the losses between both convoys stand at the cruiser Hermione (sunk by U-205, South of Crete), five destroyers and 40 aircraft. 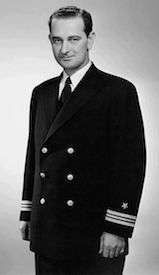 Gott’s XIII is ordered to take up defensive positions on the Egyptian frontier. This left the city exposed to another siege, for which its defenses were inadequate, having been allowed to deteriorate during the winter.

Future president Lt. Cdr. Lyndon Johnson is released from duty in the Navy after Roosevelt orders all members of Congress serving in the armed forces to return to legislative duties.

1943
93 out of 94 Japanese planes are destroyed during a massive attack on allied shipping round Guadalcanal.

1944
The real flying bomb offensive on Britain begins as 95 V1’s cross the coast before 6am and a total of 244 reaching England that day. The German press calls it the ‘beginning of the day of vengeance’.

The Eighth Army captures Foligno and Spoleto, east of Orvieto and approach Perugia.