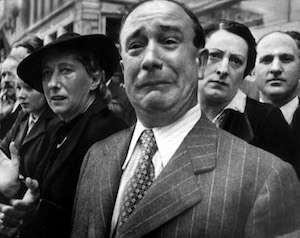 Spanish troops enter Tangier. British troops capture Fort Capuzzo and Maddalena, destroy the fixed guns and emplacements and then retire back to Egypt.

1941
President Roosevelt orders the freezing of all German and Italian assets, as well as those of occupied countries.

Hitler meets with his top generals to discuss matters concerning the upcoming campaign against the Soviet Union. The ‘Lucy’ spy ring passes information to the Soviet Union, detailing the start date for a German attack as the 22nd June.

1942
Air Marshal Harris is recognized for his achievements with the recent 1,000 bomber raids with a knight-hood.

German troops of the 16th Regiment of the 22nd Airlanding Division take Fort Stalin in Sevastopol.

Auchinleck tells Ritchie that Tobruk must be held, a fact that Churchill reiterates to him. The Eighth Army now holds a line directly in front of Tobruk, running from the coast to Acroma, then southeast to El Adem and then directly south to Bir El Gobi.

The first axis attacks are made against the ‘Harpoon’ and ‘Vigorous’ convoys. ‘Harpoon’ loses a freighter and receives damage to a cruiser from an axis air attack off the Tunisian coast. ‘Harpoons’ escorting aircraft carriers turn back at this point. In the late afternoon, the ‘Vigorous’ convoy passes out of air cover range and promptly losses two freighters to axis air attacks. Another freighter is forced to return to Alexandria as it is deemed to slow.

1943
RAF Coastal Command begins daily patrols over the Bay of Biscay with aircraft equipped with new detection devices to locate and destroy German U-boats leaving and entering their bases on the French coast.

A German report shows that 100,000 cases of typhus were reported on the Russian front during 1942, with a fatality rate of 15%.

1944
His Majesty the King and de Gaulle visit the Normandy front (separately). Carentan is finally in U.S. hands after a week’s fighting in Normandy.