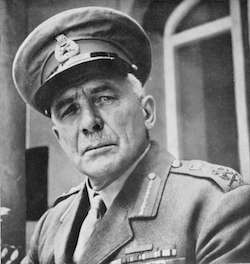 On the orders from General Weygand, C-in-C of the French Army, the French forces opposing the advance of Army Group A withdraw to the South, offering little resistance. The Germans cross the River Marne, consolidate bridgehead South of the Seine and claim to have occupied Rheims. Four French divisions and most of the British 51st Highland Division is cut off and captured by Rommel at St. Valery-en-Caux.

The Soviet Union issues an ultimatum to Lithuania, demanding that the Red Army be allowed to occupy the country.

1941
The RAF raids the Ruhr, Rhineland and German ports in the first of 20 consecutive night raids.

The German pocket battleship LÂ¸tzow (formerly Deutschland) is attacked and damaged by RAF aircraft off the southern coast of Norway.

1942
Rommel, having now brought up tank reserves, could now muster 124 tanks against the 248 British tanks. He therefore attacked the British positions between Knightsbridge and El Adem, trapping much of the British armor.

1943
The RAF launches a heavy raid on Bochum in the Ruhr. The Luftwaffe carries out a night attack against Plymouth.

King George VI lands in Morocco, only his second sanctioned visit of the war to forces overseas.

1944
U.S. troops fighting for Carentan, link up with British troops, thereby completing a solid line along a 50-mile battle front. So far, the allies have landed 326,000 men and 54,000 vehicles onto the Normandy beaches.

1945
Eisenhower is awarded the Order of Merit and becomes the first U.S. recipient.