The British submarine Salmon is lost south-west of Stavanger, Norway. The German raider Komet leaves Bergen in Norway for operations in the Pacific via the Northwest Passage in the Arctic Ocean assisted by Russian icebreakers.

The British and Italian fleets make contact at Battle of Cape Spartivento.

The British force includes 1 Aircraft Carrier and 3 Battleships, while the Italian squadron under Admiral Campioni consists of 2 Battleships, 6 heavy and 12 light cruisers. The Italians brake off contact after their flag ship Giulio Cesare is hit and damaged, although they still claim a naval victory.

General Dentz sues for peace in the Middle East. 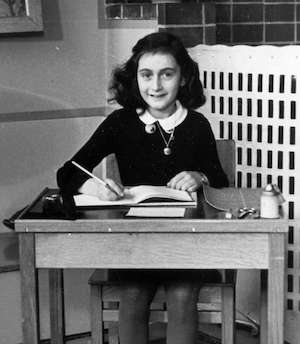 Anne Frank and her family go into hiding in the attic above her father’s office in an Amsterdam warehouse.

Renewed German attacks against the British defenses at El Alamein bog down in the face of stubborn British resistance.

1943
Operation ‘Husky’ begins, with the US 82nd and the British 1st Airborne Divisions making the first landings on Sicily at night. However, due to navigational errors, hundreds of U.S. paratroopers are dropped in the sea and are drowned, while many others are widely scattered and miss their assigned targets.

The Russians say that the German attack at Kursk has been held and claim that 2,000 tanks have been destroyed in four days.

At least 12 die as a German hit and run bomber hits East Grinstead cinema during an afternoon performance.

1944
Units of the British Second Army enter Caen which has been reduced to a heap of rubble due to the preceding heavy aerial and artillery bombardments by the British. U.S. XIX Corps begins its push for St. Lo.

All Japanese resistance in the Ukhrul area on India-Burma border crushed by the British.

U.S. Marines defeat the Japanese on Saipan after a final Banzai charge. 27,000 Japanese and 3,116 Americans were killed on Saipan.