1940
President Roosevelt lays down ‘five fundamentals of freedom’: freedom from fear, of information, of religion, of expression, and from want.

The RAF carries out night raids on Kiel and Wilhelmshaven.

The British destroyer Whirlwind is sunk by U-34 off Land’s End.

Romania announces its alignment with the Axis powers.

In retaliation for the British action at Mers-el-Kebir, Vichy French warships based at Dakar capture 3 British merchant ships, while French aircraft stationed in Morocco attack British shipping off Gibraltar.

The RAF carries out night raids on Munster and Bielefeld.

Units of German 6th Army break through the Stalin Line East of Lvov, while Panzer Group 1 continues its advance toward Zhitomir and Berdichev in the Ukraine.

General Wavell is relieved of his command as C-in-C of the Middle East, by General Sir Claude Auchinleck.

1942
Advanced units of 4th Panzer Army reach the Don north and south of Voronezh, which causes the Russians to begin its evacuation. 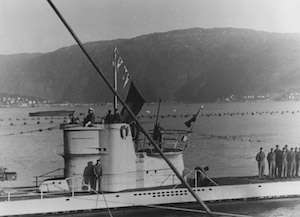 Upon learning that the covering force for PQ-17 had fled and the convoy had scattered. Admiral Raeder secured Hitlers approval to use the German surface force, although caution was to be exercised in order not to risk the sinking or damage of the Battleship Tirpitz, pocket battleship Admiral Scheer or heavy cruiser Hipper. Escorted by 7 destroyers and 2 E-boats, the 3 big German ships sailed from Altenfiord at 3pm. As the force left moved in to open seas, the soviet submarine K-21 saw and attacked the Tirpitz, but its torpedos missed. An hour later an RAF Coastal Command Catalina reported the force as at sea and a further two hours later HMS Unshaken, radioed in a sighting and an exact description of the force. Hearing of these allied sightings through allied intelligence, Admiral Raeder became nervous and cancelled the sortie, ordering the surface fleet to return to port leaving the Luftwaffe and U-boats to finish off PQ-17.

Axis troops start laying minefields in front of their positions at El Alamein.

1943
The Germans launch operation ‘Citadel’, their last major offensive on Russian Front on a 200-mile front, with the 9th Army attacking from the North and 4th Panzer Army attacking from the South. The Germans have deployed 37 divisions totaling 900,000 men, which include 11 Panzer divisions with 2,500 tanks and assault guns, 10,000 guns and Nebelwerfers, as well as 1,800 aircraft. Against this, the Red Army has 1,300,000 troops in deeply echeloned defensive positions, protected by 8,000 land mines per square mile, 3,300 tanks, 20,000 guns and 2,500 aircraft. Taken together, the opposing forces in this operation constitute the largest concentration of military power ever assembled in history. In the northern sector, the Germans advance 6 miles, while in the southern sector they manage 25 miles against stubborn Soviet resistance which inflicts heavy casualties.

A Naval battle erupts in Kula Gulf, North of New Georgia. The US Navy loses the cruiser Helena, but claims eight or nine Japanese ships have been sunk.

1945
SHAEF says of the 5.8m displaced persons (found in the Anglo-American Zone, 3.26m have been repatriated and 2.53m, mostly Eastern Europeans) still remain in repatriation camps.

MacArthur announces the liberation of the whole of the Philippines, although sporadic fighting continues until after the Japanese surrender. U.S. losses total 11,921 dead and 42,970 injured or captured.