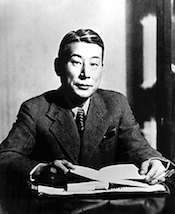 Hitler appraised the Army plan for the invasion of Britain at a conference of his top Military chiefs. The Navy criticize the plan for being on a too broad a front, requiring 2,500 barges in order to transport the invading forces, which cant be concentrated before the 15th of September at the earliest. The Army refute these arguments, saying that too narrow a front would allow the British to concentrate what forces they posses.

Hitler formally announces to his military commanders that he has decided to invade Russia.

In Lithuania, Japanese Consul Chiune Sugihara begins writing thousands of visas for Jews to flee through the USSR into Japanese-controlled China.

First Mitsubishi Zero is delivered to the Japanese navy.

Joseph Terboven declares a state of emergency in Norway.

Army Group North, which is slowly advancing toward Leningrad, reaches Lake Ilmen, to the south of Novgorod. However, its troops are very fatigued due to the marshes and heavily wooded terrain.

The German advance into the Northern Caucasus continues.

1944
The British VIII Corps begins ‘Operation Bluecoat’, an assault towards the river Vire. The U.S. 4th Armoured Division captures Avranches, having advanced 35 miles and taken 20,000 prisoners since the 25th July.

The Soviet army takes Kovno, the capital of Lithuania.

The last Japanese counter-attack on Tinian is annihilated. U.S. forces make further landings on the North West coast of Dutch New Guinea and begin a jungle push from Aitape.

Former head of Vichy French government, Pierre Laval, is sent from Spain to Austria under pressure from France; he is immediately arrested by the Americans and turned over to the French. He will be executed October 15 for collaborating with the Nazis.