1940
Fifty nine French warships that had sought refuge at Plymouth and Portsmouth are seized by the Royal Navy, but only after overcoming armed French resistance in some cases. 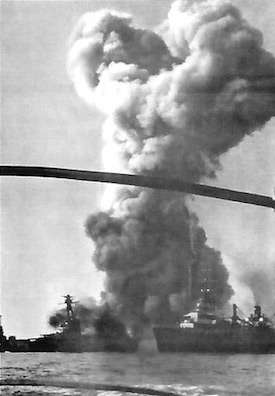 The British Auxiliary AA ship Foyle Bank is sunk in German air attacks on the docks at Portland, Dorset.

Due to heavy losses at the hands of the Luftwaffe the British suspend all future convoy from passing through the English Channel.

Heavy units of the British Navy, code named Force H (Somerville), launch an attack (Operation Catapult) on the French fleet stationed at Mers-el-Kebir near Oran in Algeria, sinking the battleship Bretagne and heavily damaging the battleship Provence and the battlecruiser Dunkerque. 1,300 French sailors are killed and hundreds wounded.

1941
For the first time since the beginning of the German attack on the Soviet Union, Stalin speaks to the Russian people over the radio. Demanding utmost resistance ‘in our patriotic war against German Fascism’ and says ‘A grave threat hangs over our country.’ He calls for a policy of scorched earth if the Red Army is forced to yield ground and the formation of ‘people’s partisan’ groups behind enemy lines, as well as the summary execution of all cowards and shirkers.

1942
Sevastopol, the Crimean capital, finally falls to Germans, along with 97,000 Soviet prisoners. The German and Romanian forces lost 24,000 men.

Eleven U-boats in the area begin to close in on convoy PQ-17 or place themselves along the route of the convoy. 6 U-boats make attack runs throughout the day, but have no success and either lose contact or fall behind the convoy.

Due to exhaustion and lack of supplies, especially fuel for the armored divisions, Rommel orders his German and Italian forces to suspend all offensive operations before El Alamein and begin constructing defensive positions.

1943
The RAF carries out a heavy night raid on Cologne, causing considerable damage and killing hundreds of civilians.

The opening of operation ‘Citadel’, the massive German offensive to encircle and destroy the Soviet forces in the Orel-Belgorod salient near Kursk, is delayed by one day because of heavy Soviet air attacks against the German deployment areas.

US troops from Nassau Beach link up with the Australians who are under heavy attack at Mubo in New Guinea. Operation ‘Cartwheel’ continues with further advances in the Solomon’s.

1944
The U.S. First Army opens a general offensive to break out of the hedgerow area of Normandy, France.

Minsk, the capital of Byelorussia is captured by the Russians, trapping 100,000 Germans in a pocket to the East.

Prime Minister Curtin returns to Australia after the Commonwealth conference in Britain.

1945
U.S. troops land at Balikpapan and take Sepinggan airfield on Borneo in the Pacific.