A German memorandum issued by the OKM states that an invasion of Great Britain will not be possible until the second half of September 1940 and that the prospects for such an invasion seem doubtful.

James Melville ‘Jimmy’ Cox, the Reuters’ correspondent in Tokyo was arrested on 27th July by the Kempeitai on the usual non-specific charge of espionage. Two days later he was seen falling from an open window on the third floor of the Kempeitai Headquarters. They claimed that he had committed suicide because he was guilty of espionage.

Dutch freeze Japanese assets; now Japan has lost 75% of foreign trade and 90% of its oil supply.

1942
German troops take Proletarskaya and establish a bridgehead over the Manych River in the Caucasus region.

As Australians retreat, Japanese take Kokoda and its airfield in Papua New Guinea. 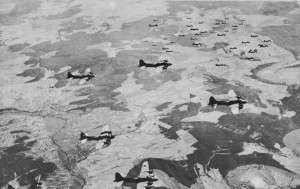 The mass evacuation of a million civilians from Hamburg is ordered after the recent heavy bombings.

Army Group A launches counter attacks to improve its positions along the Mius River.

The Red Army reaches to the Baltic coast to the West of Riga, thereby cutting Army Group North off in Estonia and Eastern Latvia.

The Orote Peninsula is secured on Guam.

1945
After having delivered the atomic bomb to Tinian, cruiser USS Indianapolis is sunk by Japanese sub I-58 off Leyte, and is not missed for days. Only 316 of 1196 men will survive the shark-infested waters.