1940
All road and rail links between occupied France and Vichy cut by the Germans.

Act of Havana is signed by the US and twenty Latin American countries, agreeing to help any country threatened by the Axis in the Americas.

1942
The effect of the fall of Rostov spreads panic and terror in the Soviet Union, prompting harsh counter-measures byÂ the Soviet High Command.

1943
The second mass raid on Hamburg by 722 RAF bombers results in nine square miles of city being set alight.

The Japanese garrison of 6,000 troops are secretly evacuated from Kiska in the Aleutians.

Brest-Litovsk, on the Polish frontier is taken by the Russians. More crossings over the Vistula are also made. 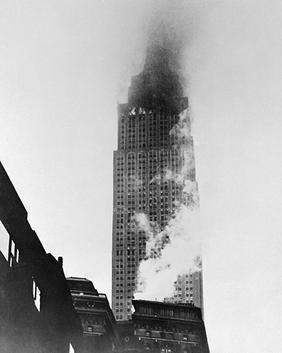 A B-25 bomber crashes into the Empire State Building at 79th floor in fog, killing 14 people.

The remnants of Japanese battle fleet are destroyed in three days of attacks over the Japanese Inland Sea, as the Americans deploy 2,000 carrier-planes and bombers in action.

Destroyer USS Callaghan is sunk, the last Allied ship to be sunk by kamikaze.