1940
Reports of Lancastria disaster released in London after Churchill’s ban on the news lifted. 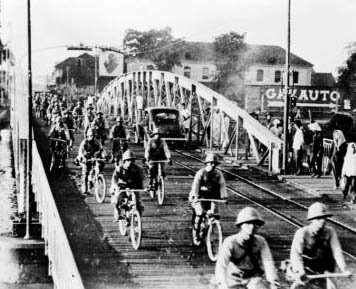 US imposes a crude oil embargo on Japan.

1942
Roosevelt agrees with Churchill that operation ‘Gymnast’ should proceed, whilst operation ‘Sledgehammer’ should be canceled.

Rostov-on-Don is captured by the 1st Panzer Army, thus clearing the way for the advance of Army Group A toward theÂ Caucasus and Kuban region. Large numbers of Russian troops are liquidated in and around Rostov after German troopsÂ have secured the city.

Finland approaches the United States, seeking its protection from the Soviets should Finland switch sides and join the allies.

1943
Operation ‘Gomorrah’ takes place when 746 RAF bombers drop 2,300 tons of bombs on Hamburg in 48 minutes, duringÂ which only 12 aircraft are lost. This tonnage is as much as Germans dropped in the five heaviest raids on London.

Fires are visible for 200 miles. This is the first operational use of ‘Window’, (radar-jamming foil strips droppedÂ by aircraft).

A battle-damaged USAAF B-17 Flying Fortress crash-lands in Sweden. Its ten-man crew becomes the first of nearly 1,000 American and other Allied airmen to be granted refuge in neutral Sweden during World War 2.

A 10-hour meeting of fascist grand council passes a motion, 19 votes to 7, asking that the King of Italy takes over command of all Italian forces from Mussolini.

1944
The River San is crossed by the Soviets to the northwest of Lvov. The Germans start evacuating Lvov.