Romania forced by Germany to give Dobruja province to Bulgaria.

Luftwaffe begins assault on Moscow with an air raid at night.

Estonia, Latvia, and Lithuania join the Soviet Union under duress.

1943
US destroyers Monaghan and Aylwin bombard Kiska in the Aleutians unopposed.

1944
Some of the German defenders of the Brody Pocket reach German lines.

Hitler gives permission to retreat from the Narva River to the Tannenberg defence line in the Sinimäed hills 20 km West from Narva.

At 1 a.m., Hitler gave a speech over the radio to prove to the German people that he was still alive. He declared that the conspirators would be “exterminated quite mercilessly

U.S. Marines land on Guam, establishing beach-heads up to a mile inland. The island is back under US control by August 10, but snipers continue to attack long after the war ends. The last Japanese soldier on the island does not surrender until the 1970s. 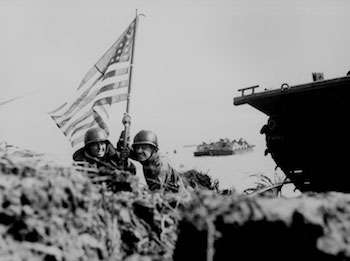 Harry S. Truman was nominated to be President Roosevelt’s running mate at the Democratic National Convention.

1945
Six truckloads of art stolen by the Nazis is returned to Florence, Italy.