1940
The British liner Arandora Star, carrying 1,500 German and Italian prisoners of war to Canada, is sunk by U-47 off the west coast of Ireland, with many casualties.

1941
The RAF carries out night raids on Bremen and Cologne.

Troops of the German 11th, Romanian 3rd and 4th Armies begin an offensive from Moldavia toward Vinnitsa and the Black Sea port of Odessa.

China breaks off diplomatic relations with Germany and Italy.

1942
Allied convoys QP-13 and PQ-17 pass each other while the German battleships Tirpitz and Hipper prepare to attack PQ-17 in the North Atlantic.

The British hold El Alamein despite heavy attacks, Rommel is now down to 26 tanks.

hurchill’s government overcomes a parliamentary Motion of Censure in an overwhelming vote.

US troops land on New Georgia in the Solomons. 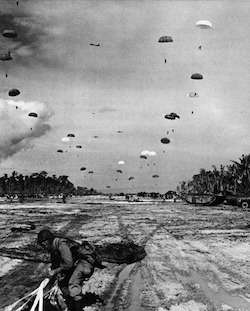 1944
The end of the battle of the ‘Scottish Corridor’ in Normandy result in the German counter-attacks failing to eliminate it. Field Marshal von Rundstedt, C-in-C West, is replaced by Field Marshal von Kluge.

The Russians cut the railways to the West of Minsk.

USS Barb attacks Kaihyo Island with the first use of rockets by a sub against shore installations.