1940
The German Army presents its plan for the invasion of Britain. Six divisions are to land between Ramsgate and Bexhill in the southeast corner of England, four will land between Brighton and the Isle of Wight and three on the Dorset coast. Two Airborne division’s will also be deployed, with follow up forces including six Panzer and three Motorised divisions.

The first anti-Jewish measures are taken in Vichy France.

Under extreme diplomatic pressure, Britain agrees to close the Burma Road, a vital supply route for the Chinese army.

1941
FDR wants to double the 7 night baseball games to keep war workers on the job.

In Finland the old 1939 border is crossed by Finnish forces at KÃ¤snÃ¤selkÃ¤. 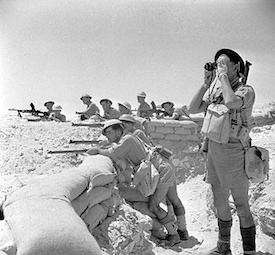 Himmler visits Auschwitz-Birkenau for two days, inspecting all ongoing construction and expansion, then observes the extermination process from start to finish as two trainloads of Jews arrive from Holland. Kommandant Hess is then promoted. Construction includes four large gas chamber/crematories.

1943
An allied military government (Amgot) is set up in Sicily.

1944
Two ammunition-laden transport ships explode whilst docked at Port Chicago, California. 320 sailors and other military personnel are killed in what is the worst stateside disaster of the war. Most of the sailors were African-Americans, who had received no training in ammunition handling. Many of the survivors refused to load any more ships until proper safety procedures were put in place. The so-called “Port Chicago Mutiny” resulted in numerous court martials and imprisonments, but the publicity surrounding the event led directly to the end of racially segregated assignments in the Navy two years later.

Rommel is severely wounded by a Spitfire attack after his inspection of defenses Southeast of Caen.

The Germans say they will hold Baltic States ‘at all costs’, as the Russian advance approaches the Latvian border.