Churchill broadcasts that Hitler must recast his invasion plans.

British commandos launch a raid against Guernsey in the Channel Islands, with negligible results.

A force of German bombers attacks Suez, Egypt, from bases in Crete.

1941
Believing the campaign in the East soon to be concluded in Germany’s favor, Hitler orders the German war industry to shift production away from guns and armored vehicles to U-boats and planes.

Army Group North is now only 80 miles from Leningrad. 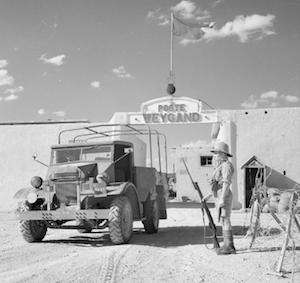 An armistice is signed at Acre between Vichy and British/Free French forces. This requires all French material to be handed over to the British and gives the Vichy French the choice of joining the Free French or returning to France. Most opt for the latter. During the campaign the Vichy French suffered 3,350 killed or wounded, while the

Beginning of deportation of Dutch Jews to Auschwitz.

The advance by Army Group A towards Rostov continues against minimal Soviet resistance.

A British attack against axis positions to the South of El Alamein is repulsed.

to locate and destroy German U-boats leaving and entering their bases on the French coast.

Joining in the counter-offensive by the Central, Bryansk and Western Fronts, the Soviet Voronezh Front launches

attacks against the 4th Panzer Army and Army Detachment Kempf in the southern sector of the Kursk salient.

A new Russian offensive begins in the northern Ukraine opens with massive support from the Red Air Force and gains up to 10 miles and recaptures Pinsk.

1945
The first Bastille Day for five years is celebrated enthusiastically by the French.