1940
The Luftwaffe carries out raids on Aberdeen in Scotland and Cardiff in Wales.

Britain launches “Pots into Planes” campaign to collect aluminum for military use. 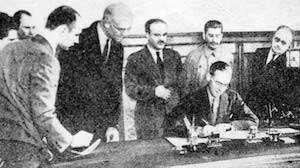 1942
Troops of Army Group North complete the reduction of the Volkhov pocket, taking 30,000 Soviet prisoners, including General Vlasov, CO of the Second Guards Army and later to become C-in-C of the anti-Bolshevik Russian Liberation Army.

The STAVKA establishes the Stalingrad Front under Marshal Timoshenko, from the remnants of the South-West front.

1943
The greatest tank battle in history’ takes place near Prokhorovka, as the Soviet Central, Bryansk and West Fronts begin a massive counter offensive in the area of Orel, Bryansk and Kursk.

At Krasnograd near Moscow, a group of captured German officers, including Field Marshal Paulus and General von Seydlitz, and exiled German communists form the ‘National Committee for a Free Germany’ that calls for the overthrow of Hitler and the cessation of hostilities against the Soviet Union.

1944
The US VIII Corps slowly gains ground in its offensive towards St. Lo, against fierce resistance by units of the German 7th Army.

General Theodore Roosevelt Jr., son of the former president, dies of a heart attack in Normandy.

1945
Further allied landings are reported on Borneo. The Australians capture Maradi in the west of the island.

On Mindanao in Philippines, US Eighth Army lands at Sarangani Bay to crush final resistance.