Preliminary phase of Battle of Britain begins with German air attacks on Channel convoys with the aim of tempting the RAF in to battle. The Luftwaffe launches its first large scale attack on Britain as 70 aircraft attack the dock facilities at Swansea and the Royal Ordnance Factory at Pembrey in Wales.

1941
Panzer Group 1 repulses a violent Soviet counter-attack in the area of Korosten to the west of Kiev.

The Finnish Karelian Army begins an offensive toward Lake Ladoga to the Northeast of Leningrad. 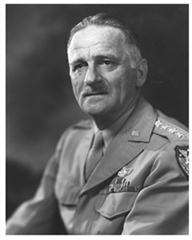 General Carl Spaatz becomes the head of the U.S. Air Force in Europe.

The first two ships of the ill-fated Arctic convoy PQI7, arrive at Archangel.

Admiral Chester Nimitz is awarded the Distinguished Service Medal for meritorious service, with special attention focused on the battles of the Coral Sea and Midway.

1943
Operation ‘Husky’, the Allied invasion of Sicily, is now fully underway with 12 divisions (160,000 men and 600 tanks) of the British Eighth and U.S. Seventh Armies being brought ashore by 3,000 landing craft (200 sunk by rough seas) on the south-east coast of Sicily. While the British approaching Syracuse meet with little German resistance, the U.S. forces are held back by strong counter-attacks of the Hermann Goring and the Italian Livorno Divisions.

1945
The USSR, U.K. and U.S. agree on the administration of greater Berlin and decide that France is to be included.