German troops occupy Jersey and complete the capture of the Channel Islands, the only British territory ever captured by Germany during World War 2. The French government of Marshal Petain moves from Bordeaux to Vichy. Germany asks the USA and other neutrals to withdraw diplomatic missions from Belgium, Holland, Luxembourg and Norway. British milk price maximum is raised to 4d a pint.

Marshal Balbo is replaced by Marshal Graziani as C-in-C of the Italian forces in Libya.

Coal deliveries to all establishments in Britain limited to one ton per month. 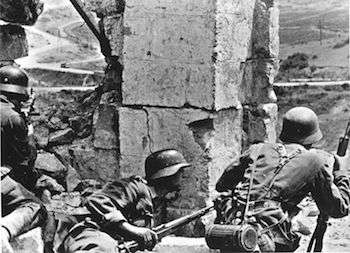 Rommel captures 2,000 prisoners from the El Alamein ‘box’ but loses 18 of his 55 remaining tanks.

1943
Hitler addresses the generals taking part in the imminent operation ‘Citadel’ at Kursk.

1944
The invasion of southern France is fixed for the 15th August. Since D-Day, the Allies have landed 920,000 troops, 177,000 vehicles and 600,000 tons of supplies and equipment. In the 24 days of fighting, they have lost 62,000 men killed, wounded and missing. Beginning of the Bretton Woods Conference convened to deal with postwar financial and economic problems. The establishment of the International Monetary Fund for Reconstruction and Development is announced.

1945
The U.S. 2nd Armoured Division from Halle enter Berlin in accordance with the four-power agreement over the division of Germany into zones.

The Australian 7th Division lands at Balikpapan on South East coast of Borneo after a 15-day bombardment.