1940
British declare Germans may not use Norwegian waters.

1941
President Roosevelt makes his “Four Freedoms” speech in his State of the Union address to Congress and repeats his proposal for Lend-Lease program to send supplies to Britain. 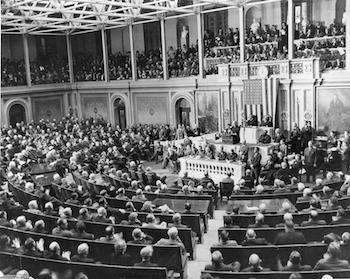 The Luftwaffe launches its first attacks against British convoys bound for Malta in the Mediterranean.

Churchill demands that troops be released from Wavell’s offensive and sent to Greece..

1942
Roosevelt announces that US forces are to be based in UK.

Roosevelt’s State of the Union address calls for the production of 60,000 aircraft and 1.2 million tons of shipping in 1942.

Rommel’s battered forces reach the Tripolitanian frontier having evaded all British attempts to cut them off.

In Moscow, the Russian Foreign Minister denounces German atrocities in occupied Russia, where in Kiev alone 52,000 people have been massacred. ‘The Soviet Union will never forget or forgive’.

The allies announce that jet-propelled aircraft will soon to be in production. The Air Ministry says that Bomber Command dropped 157,000 tons of bombs on Germany in 1943, while the Luftwaffe dropped only 2,400 tons on Britain.

The ban on dancing is lifted in Finland, where it had been illegal to dance during wartime.

Boeing B-29 bombers in the Pacific strike new blows on Tokyo and Nanking.