1940
Nazis choose the town of Oswiecim (Auschwitz) in Poland near Krakow as site of new concentration camp.

US auxiliary ship Bear reaches deepest penetration by any ship yet into Antarctica.

1942
Thailand declares war on Britain and the US.

Australia begins full mobilization of all assets at its disposal.

The US enquiry in to the disaster at Pearl Harbor finds Admiral Kimmel, then the C-in-C of the US Fleet, guilty of dereliction of duty. A court martial is announced later.

German troops capture Msus, which threatens the 4th Indian Divisions position at Benghazi. Lieutenant General Ritchie, orders the 4th Indian Division to withdraw to a line running from Derna to Mechili, but this order is countermanded by General Auchinleck who wanted the 8th Army to counter-attack. However, the 8th Army was to widely dispersed and Rommel’s forces were advancing to quickly.

1943
Prime Minister Churchill and President Roosevelt end the Casablanca Conference with their announcement of the demand for the unconditional surrender of Germany and Italy.

The Red Army succeeds in splitting the remnants of 6th Army into a northern and a southern pocket. German forces evacuate Armavir and Voronezh.

Stalin’s Order of the day says that the Red Army has routed 102 German divisions in the last two months.

The Pentagon opens—the largest office building in the world. 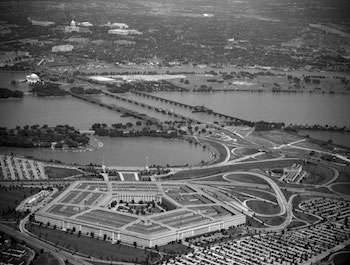 Diary entry by Hans Frank, Gauleiter of Poland, concerning the fate of 2.5 million Jews originally under his jurisdiction – “At the present time we still have in the General Government perhaps 100,000 Jews.”

Australian advances in New Guinea are announced, with the Japanese cleared from the ‘Shaggy Line’.

Japanese destroyer Suzukaze was torpedoed and sunk northwest of Ponape by the American submarine Skipjack.

1945
Zhukov cuts off the Fortress city of Posen which holds 66,000 Germans and continues his 50-mile a day advance.

The Battle of The Bulge ends.