1941
Hitler and Mussolini meet at Berchtesgaden, with Mussolini accepting German military help in North Africa, but not Albania.

British troops under General Platt, re-occupy Kassala in the Sudan and advance into Eritrea. 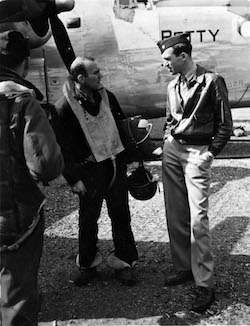 Actor James Stewart receives his wings and commission in the US Army Air Forces.

Two Axis transports, the Mongevino and Ankara land 45 German tanks at Benghazi as reinforcement, while axis forces evacuate the city.

Japanese troop capture Tavoy as their advance continues in Burma.

1943
Russians claim further victories during a 75-mile advance towards Kharkov on the Voronezh front, with the Russians claiming 52,000 axis prisoners on this front alone.

The Eighth Army captures Homs and Tarhuna, near Tripoli.

US launches final offensive on Guadalcanal.

Germans forces are surrounded in Novgorod, 100 miles to the South of Leningrad, but manage to break out.

1945
Hitler orders that all divisional sized and larger attacks or retreats must have his approval.

USAAF B29 bombers destroy the Kawasaki aircraft works near Kobe, in Japan.