The Battle of Kunlun Pass ended with the Chinese holding the pass.

1941
The Greeks complete the Capture of Klisura Pass.

The British complete Operation Excess with all convoyed freighters reaching their destinations. However, the light cruiser HMS Southampton was bombed and sunk off Malta by the Luftwaffe.

Hitler issueds Directive No. 22, German Support for Battles in the Mediterranean Area. 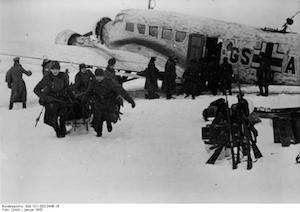 1942
The Red Army cuts the main supply route for the German 2nd and 10th Corps at Demyansk near Lake Ilmen, forcing the Luftwaffe to begin flying in supplies. Field Marshal von Bock takes over command of Army Group South from Field Marshal von Reichenau who died of a heart attack. The Soviet South West Front launches an offensive across the river Donets, to the South of Kharkov in an attempt to cut of all German forces north of the Sea of Azov. German troops of 11th Army recapture Feodosiya and seal off the Soviet bridgehead at Kerch in the Crimea.

As Japanese advance, RAF withdraws bombers from Singapore to Sumatra.

Dutch begin to destroy oil facilities at Balikpapan, Borneo so they won’t fall into Japanese hands.

1943
The Russians break through the German stranglehold on Leningrad to relieve the city from the East. In the Caucasus, the Russian advance continues. Cherkessk is captured by the Red Army, who are now less than 250 miles south east of Rostov.

First resistance by Jews in the Warsaw Ghetto.

The Germans counter attack in Tunisia. They gain ground against the Free French, but are repulsed by British forces.

The Japanese cruiser Kuma is torpedoed and sunk off Penang, Malaya by the British submarine Tally-Ho.

U.S. President Franklin D. Roosevelt makes the annual State of the Union Address to Congress, proposing the Second Bill of Rights guaranteeing such things as housing, medical care and education.

The Soviet Union responds to the Polish declaration of January 5 with a statement through TASS. The Soviet government disputes Polish territorial claims and insists that the Soviet-Polish border had been determined through “the plebiscite carried out in 1939 on a broad democratic basis”. The statement also accuses the Polish government-in-exile of being “incapable of establishing friendly relations with the USSR, and shows itself incapable of organizing active resistance against German invaders inside Poland. Moreover, by its erroneous policy it has often plays into the hands of German invaders.”

1945
German troops evacuate Kracow. A German offensive begins from Lake Balaton, with the aim of lifting the Red Army’s siege of Budapest.

Nazis evacuate 66,000 inmates from Auschwitz back into Germany.

On Luzon in the Philippines, the US Sixth Army drives south from Lingayen Gulf toward Manila.