1940
Hitler orders the postponement of his attack in the west until the Spring. Likely reasons for this are the compromise of ‘Fall Gelb’ and increasing criticism from some commanders that the plan was too predictable. Led by Gerd von Rundstedt, they proposed instead that the main blow should come through the wooded Ardennes region in southern Belgium as the allies would not expect this.

1941
French forces in Indochina launch an offensive against Thailand after numerous border provocations, but are unable to make much headway on land.

French inflict a naval defeat on Thai forces at Koh-Chang.

The Germans bomb Malta for the first time, killing 50 people, destroying 200 buildings and damaging the capital city of Valletta. 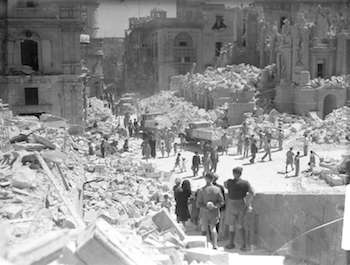 The British troopship Oropesa is sunk in the Western Approaches by the German submarine U-96.

German submarine U-77 was commissioned.

1942
Heavy US losses on the Bataan Peninsula as the Japanese troops press the defenders back.

In the Battle of Muar in Malaya, the Japanese 5th Infantry Division crossed the Muar River and captured Muar itself.

1943
The Eighth Army destroys Rommel’s rearguard at Buerat, in Libya and is now just 300 miles from the Tunisian frontier. Iraq enters the war against all three Axis powers.

Berlin is bombed for the first time in 14 months, as the United Kingdom’s Royal Air Force bombers began the heaviest raid ever on the German capital. During the night raid, 1,000 tons of bombs fell and fires were visible for 100 miles.

1944
Dwight D. Eisenhower formally assumed the duties of the Commander in Chief of the Allied Expeditionary Forces.

Japanese submarine I-181 ran aground and was wrecked on Gneisenau Point at Kelanoa Harbour, New Guinea.

German submarine U-544 was sunk in the Atlantic Ocean by rockets and depth charges from Grumman TBF Avenger planes from the escort carrier USS Guadalcanal.

1945
The Battle of the Bulge ends as US First and Third Armies meet in Houffalize, Belgium, cutting off the tip of the Bulge.

Hitler enters his bunker under the Chancellery and will never leave Berlin again.

German submarine U-248 was depth charged and sunk by U.S. destroyer escorts north of the Azores.