1941
Recruiting of Norwegians for the ‘Nordland’ Regiment of the 5th SS Motorized Division ‘Wiking’ begins.

1942
Hitler orders Admiral Otto Ciliax, who commands the battleships Scharnhorst and Gneisenau and the cruiser Prinz Eugen at Brest, to prepare to return to Germany. The new German battleship Tirpitz, sister ship of the Bismarck is ordered to Norway. 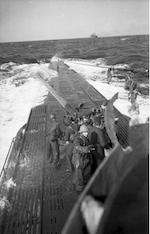 Col. Charles Lindbergh is refused a military command due to his vocal pre-war isolationist work.

US forms National War Labor Board to deal with union wage demands.

In US, Victory Book Campaign begins to collect reading material for servicemen.

1943
The Red Army begins an offensive to restore the land communications with the encircled city of Leningrad. The Germans abandon a 300 miles salient in Caucasus. And withdraw towards the Kuban Bridgehead. The Red Army gains several more streets in the bloody battle for Stalingrad.

Gen. Leclerc drives the last Germans troops out of the Fezzan in Southern Libya with his Free French forces from Chad.

1944
Churchill and de Gaulle meet for talks at Marrakesh.

1945
The German ‘Nordwind’ offensive is stopped 13 miles from Strasbourg. British and U.S.forces link up in the Laroche area.

Koniev’s 1st Ukrainian Front launches a major winter offensive from its bridgehead across the Vistula at Baranov in southern Poland.

Take a look a these other WWII Posts: