1941
Hitler confirms in Directive No.22, his intentions to send military support to the Italians in Albania. The operation is to be named ‘Alpine Violets’.

Hitler confirms in Directive No.22, his intentions to send military support to the Italians in Libya.
The operation is to be named ‘Sunflower’.

In Luftwaffe raid to London, a direct hit on the Bank underground station kills 111.

1942
The Japanese 5th Division enters Kuala Lumpur, which is the main supply base for the Indian 3rd Corps. By this time Japanese forward elements are coming in to contact with the 8th Australian Division, which puts up fierce resistance, although Japanese amphibious landings to their south force them to retreat and ends British hopes of a protracted defence of Johore.

The Japanese invasion of the Dutch East Indies begins with landings at Tarakan (Borneo) and Manado (Celebes).

The Kriegsmarine begins Operation Drum Beat, the first coordinated attack carried out by five U-boats initially against US shipping along the East Coast of the United States. Their first victim is the 9,000 ton British steamer Cyclops which is sunk by U-123 (Kptlt. Hardegen), 300miles to the east of Cape Cod.

1943
President Roosevelt submits his budget to the U.S. Congress. $100 billion of the $109 billion budget is identified with the war effort. 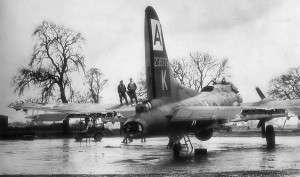 Ciano and 17 others are shot by firing squad.

660 heavy bombers of the U.S. 8th Air Force carries out attacks against industrial targets at Braunschweig, Magdeburg and Ascherleben.

In the US Eighth Air Force raid on Brunswick, the 94th Bomb Group makes a rare second run on the target and receives the Presidential Unit Citation; however, the group loses 8 B-17s.

U.S. troops establish a firm hold on the Luzon beachhead.