Hitler informs his commanders that the attack in the west will begin on the 17th January. On this same day a German light aircraft makes a forced landing at Malines in Belgium, near the German border. The planes occupants were carrying details of the German plans, which alerted the Belgium and Dutch governments to German intentions.

1941
Roosevelt introduces his ‘Lend Lease’ bill to the House of Representatives as House Resolution 1776 (H.R. 1776), after recognizing that neither Britain or China could continue paying indefinitely for material supplied. This allowed the fighting allies to pay the USA back in kind, but after the war. He likened this to ‘lending a neighbor a garden hose to put out a fire’. 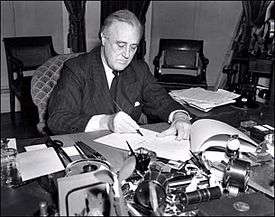 German aircraft surprise the Mediterranean fleet, which is escorting 3 merchant ships to Greece. 40 Ju-87 Stukas attack them, scoring 6 hits on HMS Illustrious and severely damaging her. HMS Warspite also receive damage. Both ships make for Malta and arrive the next day.

Germany and the Soviet Union sign a fresh treaty, which recognizes their existing spheres of influence and affirms current trade agreements.

1942
Colonel-General Ernst Udet, head of Luftwaffe aircraft production and development, commits suicide because of his failure to provide adequate replacements and new improved aircraft models to the Luftwaffe.

1943
After a 55-minute bombardment by thousands of guns and rocket-launchers and employing seven armies, the Red Army begins Operation Ring, the final annihilation of the tattered remnants of 6th Army defending themselves desperately against all odds in the ruins of Stalingrad.

1944
All but one of the Fascist ex-ministers on trial are sentenced to death at Castel Vecchio.

The Russians capture Lyudvipol, 2-3 miles across the Polish border. The Russians propose new Polish border further west on the so-called ‘Curzon Line’. German forces in Dnieper bend are attacked by the Russians for the next five days, but and early thaw aids the German defense.

1945
The German 7th Gebirgsdivision retreats from it’s positions in LÃ¤tÃ¤seno. Only a very small portion of Finland is still in German hands.