1941
Hitler, in his New Year’s order of the day to the German armed forces, promises “…completion, on the Western Front, of the greatest victory in our history…”

The Western Desert Force is renamed as the XIII Corps. 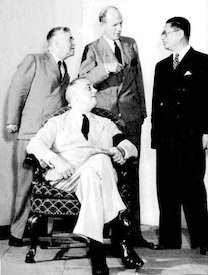 Roosevelt and Churchill sign the “Declaration by the United Nations” at the Arcadia Conference in Washington; 24 other Allied nations will sign it, promising not to seek a separate peace.

US discontinues automobile manufacturing for civilian sale for the duration; 500,000 remain in stock.

The Rose Bowl held at Duke in Durham NC due to ban on large gatherings on the West Coast (Oregon State defeats Duke 20-16).

1943
The 1st Panzer Army in the Caucasus begin withdrawing from the Terek front to avoid being cut off by Soviet forces attacking from the northeast toward Rostov-on-Don.

1944
Field Marshal Rommel is appointed C-in-C of Army Group B, the German forces in France north of the Loire river.

General Mark Clark takes over the U.S. Seventh Army in addition to the command of the U.S. Fifth Army.

The US penny production switched from steel to an alloy with copper from used shell casings.

1945
Germans launch Nordwind offensive against US Seventh and French Armies into Alsace toward Strasbourg, and 900 Luftwaffe aircraft strafe Allied air bases in France and Belgium, destroying 200 aircraft but losing 300.