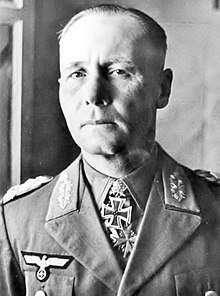 The first convoy of the newly formed Afrika Korps under the command of Lieutenant General Rommel leaves Naples for Tripoli in Libya.

Force H from Malta bombards Genoa, without hindrance from the Italian Navy or Air force.

1942
The Soviet North West Front finally cut all land communication for 90,000 troops of the German 2nd and 10th Corps at Demyansk, as the 11th and 1st Shock Armies link up on the river Lovat, about 25 miles to the west of Demyansk.

The Japanese land on the western side of Singapore Island, encountering only minimal resistance.

1943
The Russians take Kursk and continue their advance.

Japanese complete their evacuation of Guadalcanal.

1944
The Australians complete the occupation of the Huon Peninsula in New Guinea.

Plans for invasion of France, Operation ‘Overlord’ are confirmed.

The Russians capture of Nikopol. The surrounded German forces in the Korsun pocket are invited to surrender by the Russians.

The Australians complete the occupation of the Huon Peninsula in New Guinea.

1945
50,000 British and Canadians troops with 500 tanks and 1,034 guns launch a new offensive into the Reichswald, to the Southeast of Nijmegen.

Koniev breaks out of his Oder bridgehead north of Breslau, with six armies.

Generalmajor Karl Marthinsen, the head of the State Police is assassinated in his car at Blindernveien, Oslo by the resistance movement, Milorg. The Germans execute 29 Norwegians in retaliation.