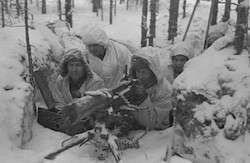 Finnish pilot Lt. Sarvanto, flying a Fokker, shoots down six out of seven Russian SB-2 bombers in just 5 minutes. The Russian 44th
Division’s commander General Vinogradov, authorizes the remainder of his troops to try escape back to Russian lines.

Hitler makes one last appeal to the Spanish leader, General Franco, to enter the war.

The Bishops of Norway start the Church’s struggle against the occupying German forces.

In his annual message to Congress, President Roosevelt announces the “Five Freedoms”.

Churchill demands that troops be released from Wavell’s offensive and sent to Greece.

The Luftwaffe launches its first attacks against British convoys bound for Malta in the Mediterranean.

1942
Roosevelt announces that US forces are to be based in UK.

In Moscow, the Russian Foreign Minister denounces German atrocities in occupied Russia, where in Kiev alone 52,000 people have been
massacred. ‘The Soviet Union will never forget or forgive’.

Rommel’s battered forces reach the Tripolitanian frontier having evaded all British attempts to cut them off.

The British are pushed back to Gazala. The British Commonwealth forces lose 40 tanks, 40 field guns and 1,400 troops. This was a disaster for the Allies in more ways than one. Now the Allied convoys to Malta must pass between Axis occupied Crete and Axis airfields in Benghazi.

1943
Russians cut off Army Group A by reaching Yeysk on the Sea of Rostov.

The Americans outflank the retreating Japanese on Guadalcanal.

1944
The allies announce that jet-propelled aircraft will soon to be in production.

The Air Ministry says that Bomber Command dropped 157,000 tons of bombs on Germany in 1943, while the Luftwaffe dropped only 2,400 tons on
Britain.

The Red Army crosses the 1939 Polish frontier after a 170-mile advance in just two weeks.

The Japanese pressure in Arakan forces the British to retreat.

1945
The 1st Belorussian Front makes further advances to reach the Oder between KÃ¼strin and Frankfurt.

General MacArthur announced the imminent recapture of Manila while his staff planned a victory parade. But the battle for Manila had barely
begun.

The ban on dancing is lifted in Finland, where it had been illegal to dance during wartime.

Boeing B-29 bombers in the Pacific strike new blows on Tokyo and Nanking.