1940
British and French governments agree to land an expeditionary force in northern Norway without regard for Norway’s neutrality in order to aide Finland, although it was never carried out.

First sinking of a U-boat by a lone British destroyer: in convoy OA-84 off Land’s End, HMS Antelope sinks U-41.

1941
An advanced column of armoured cars from the 7th Armoured Division intercept the Italian retreat about 70 miles south of Benghazi. 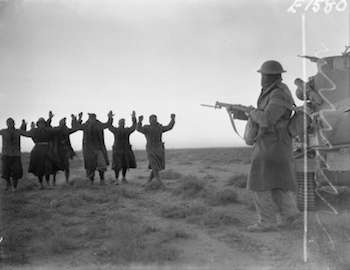 US National Naval Medical Center is established in Bethesda, MD.

1943
Mussolini sacks his son-in-law, Count Ciano from Foreign Ministry and takes control himself.

1944
U.S. troops reach the outskirts of Cassino, but are repulsed.

The ‘Chindits’ begin moving towards Indaw, 100 miles behind the Japanese lines in Burma.

RAF balloon command to be disbanded as the air raid threat lessens. 278 V1’s have been claimed by balloons.

US Seventh and French Armies link, splitting the Colmar pocket in France.

MacArthur orders a containment in the northern Philippines, as the main effort is directed to the capture of Manila. The Australians land on the Japanese stronghold of New Britain, East of New Guinea.